Saturn’s hexagon from Calar Alto and from space 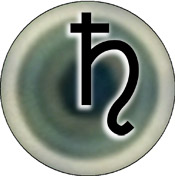 Thirty years ago, a peculiar hexagonal structure circling the North pole of planet Saturn was observed for the first time. Nothing similar, with such a regular structure, had ever been seen before in the Solar System. Now, the Planetary Sciences Group of the Basque Country University has studied and measured the phenomenon and, among other results, its rotation period has been established. Furthermore, his period may be the rotation period of the planet itself. Saturn is the only planet whose rotation period is not exactly known. This research appears on the cover of the scientific journal Geophysical Research Letters.

Space probes Voyager 1 and 2 flown by Saturn for the first time in 1980 and 1981, at 1500 million kilometres from the Sun. Among their many discoveries, the cameras observed at the upper clouds a peculiar hexagonal structure circling the North pole of the planet. The hexagon remained almost static, without motion, among the global atmospheric circulation of the planet, whose rotation period was badly known by then. Also, the Voyager images found that clouds moved fast inside the hexagon, in a narrow jet stream driven by winds well over 400 km/h. 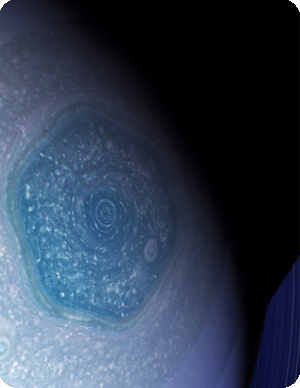 Thirty years later (what equals one Saturnian year, i.e, the time this planet takes to complete an orbit around the Sun), and during more than six consecutive years, researchers from the Planetary Sciences Group of the Basque Country University (UPV/EHU), in collaboration with astronomers from other countries, have observed again, in great detail, the North polar region of Saturn, and they have confirmed that the hexagon is still there. Measuring the positions of the vertex of the hexagon, they have determined that its motion is still extremely stable and, from cloud motion, they conclude that the inner jet stream remains unchanged. The research was performed from images taken from Earth from 2008 to 2014 with several cameras, among them the astronomical cameras PlanetCam (developed by the Planetary Sciences Group itself) and AstraLux, both installed at the telescopes of 1.23 m and 2.2 m of Calar Alto Observatory, at Almería (Spain). They also used higher resolution images taken by the space probe Cassini, a spacecraft that has been orbiting around Saturn since 2004.

The inclination of the rotation axis of Saturn, 27º, induces severe seasonal changes on the polar atmosphere, with long polar nights of more than seven years followed by a long period of 23 years with changeful illumination. However, the seasonal changes have no effect at all on the hexagon or its jet stream, what implies that both are part of an extended wave that roots deep into Saturn’s atmosphere. The UPV/EHU researchers propose that the hexagon and its stream are related to a “Rossby wave”, similar to those formed in the Earth’s atmosphere at middle latitudes. In our planet, that jet stream runs weaving from West to East, and it is linked to the low and high pressure systems that we usually see in weather maps. 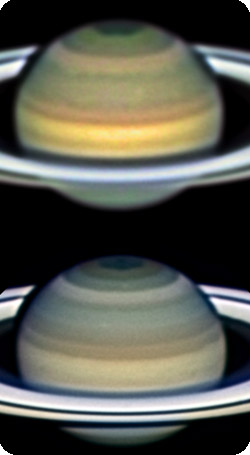 In Saturn, a gaseous planet made up from hydrogen, ten times the size of the Earth, with cold high clouds, lacking a true solid surface and with an atmosphere deeper than an ocean, “one would expect that the hexagonal undulation of the jet stream would propagate in vertical direction, what would give hints on the hidden atmosphere”, points out Agustín Sánchez Lavega, director of the Planetary Sciences Group. “The motion of the hexagon may be linked, then, to the motion of the deepest parts of Saturn, and the rotation period of this structure, determined as 10 hours 39 minutes and 23 seconds, would be Saturn’s rotation period itself”, he adds. Saturn is the only planet in the Solar System whose rotation period is not exactly known.

Data taken at Calar Alto with PlanetCam and AstraLux cameras have been crucial for this study. AstraLux is one of the most successful and interesting instruments equipping the 2.2 m Zeiss reflector. PlanetCam instrument has been developed by the Planetary Sciences Group of the Basque Country University to be used at the Zeiss 1.23 and 2.2 m telescopes of Calar Alto. PlanetCam is a good example of the importance of Calar Alto, and its 1.23 and 2.2 m telescopes, as benchs for the development of innovative instrumentation by technology based Spanish companies. The current upgrade of PlanetCam is being leaded by an Andalusian company.

Saturn in images taken in 2013 with cameras PlanetCam and AstraLux with Calar Alto Observatory 1.23 and 2.2 m telescopes. The hexagon follows the border of the dark region at the North pole. Credit: Planetary Sciences Group UPV/EHU.