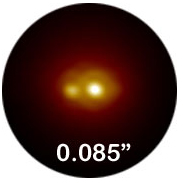 AstraLux, a new, simple instrument developed at the Max Planck Institute for Astronomy in Heidelberg, has demonstrated at Calar Alto its ability to register extremely sharp astronomical images, comparable in resolution to views obtained with the Hubble Space Telescope. The new camera circumvents the unwanted optical blurring effects of the Earth's atmosphere. Using a high-speed camera, AstraLux records the brief instants in time in which the image of an astronomical object is least affected by the turbulence of the air. This results in a much sharper image with dramatically reduced blurring. Astronomers call this procedure "Lucky Imaging". Lucky, because only those fortunate moments with the best atmospheric conditions are selected for the final image.

Lucky Imaging technique picks the sharpest images from a set acquired during several minutes, at a rate of a few tens of shots per second. Typically, only 1% of the total data enter the final selection. With Lucky Imaging astronomers observe fine details 5 to 7 times sharper than is usually possible from the ground. Thus the ground-based 2.2 meter telescope at Calar Alto matches almost the resolution obtained by the 2.4 meter Hubble Space Telescope, at a tiny fraction of the operating costs. AstraLux is capable of distinguishing details as tiny as the size of a 1-Euro coin seen from a distance of 50 kilometers: the instrument is bringing the telescope to the very limit of its optical performance (about 0.1 arcseconds at a wavelength of 900 nm, reaching the diffraction limit of the telescope). Compared to Hubble, AstraLux at Calar Alto 2.2 m telescope covers a narrower field of view, and can be used to study relatively bright objects. Astronomical targets accessible with AstraLux include close binary stars, stellar clusters, as well as rapidly varying sources like eclipsing binary stars or rapidly rotating neutron stars known as pulsars.

Even though the technique of Lucky Imaging is quite simple from a conceptual point of view, it is capable of producing excellent results thanks to recent advancements in CCD detector technology. Lucky Imaging requires a very sensitive camera capable of fast readouts with very low readnoise, as well as a fast and mathematically simple image processing. The heart of AstraLux is such a device, a commercial CCD camera from Andor Technology, Belfast, Northern Ireland, with 512 x 512 pixels and capable of taking up to 700 images per second.

During one of the first observations with AstraLux, astronomers looked at the globular cluster M15, a relic from the early years of our Galaxy. M15 is a cluster with around 1 million stars at a distance of 34 000 light-years from the Sun. Its center has one of the densest concentrations of stars known, and might house a black hole with a mass of around 1000 times the mass of our Sun. M15 contains, also, a high abundance of unusual variable stars and pulsars. 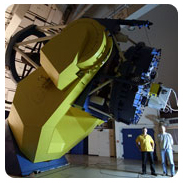 AstraLux has been developed in record time: from the idea to the first light at the 2.2 meter telescope (July 2006) only six months passed. The AstraLux team is part of the Planet and Star Formation Department of the Max Planck Institute for Astronomy, Heidelberg (Germany). The AstraLux team members are Stefan Hippler, Felix Hormuth, Wolfgang Brandner, and Thomas Henning. Stefan Hippler and Wolfgang Brander are well known experts in adaptive optics, a much more complex (and expensive) method to fight atmospheric blurring in ground-based astronomical observations.

© Calar Alto Observatory, August 2006        This email address is being protected from spambots. You need JavaScript enabled to view it.