CARMENES, a spectrograph that operates in both visible and infrared channels, operating at Calar Alto Observatory (Almería), study a three hundred stars sample in order to find similar to Earth planets.

The first results of its visible channel, derived from the study of seven planetary systems, show its perfect functioning.

CARMENES instrument, developed by a consortium of eleven institutions from Germany and Spain, and co-lead by the Instituto de Astrofísica de Andalucía (IAA-CSIC), with the participation of the Institut de Ciències de l’Espai (IEEE-CSIC) and the Centro de Astrobiología (CAB, CSIC-INTA), has been designed for searching earth like planets within the habitability zone or area that surrounds a star where the conditions allow the existence of liquid water. The first results, obtained with the Calar Alto Observatory 3.5m telescope and published today, analyze seven known planetary systems and proves its excellent performing.

CARMENES uses the radial velocity technique that looks for very small oscillations in the star movement caused by the attraction of the planets that revolve around it. And it looks near the red dwarfs (or M dwarfs), smaller than our Sun, which offer the conditions needed for the liquid water in close orbits and where (unlike the solar type ones) we can detect the oscillation caused by planets similar to ours, with current technology.

CARMENES has observed, during fifteen months, seven planetary systems studied with HIRES and HARPS, two forefront instruments for the search of extrasolar planets. CARMENES data allowed to tune our knowledge about these systems, five of them with only one known planet ( GJ 15 A, GJ 176, GJ 436, GJ 536 y GJ 1148 ) and two of them with several ones (GJ 581 y GJ 876). 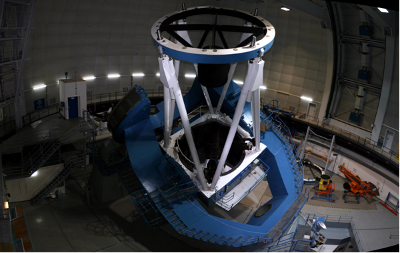 “The results are adjusted in some cases to what we already found in the scientific literature, as in the case of GJ 436, a star with a transit planet in a very close orbit, and with a mass similar to that of Neptune. However, with others we have found discrepancies with previous studies”, points out José A. Caballero, researcher of the Centro de Astrobiología (CAB, INTA-CSIC) who participates in this research.

As an example, CARMENES has not found any evidence of the existence of a planet around GJ 15A, and attributes the signal obtained by HIRES – which was interpreted as a low mass planet revolving around its star every 11.4 days – to the activity of GJ 15A. However, CARMENES has found in this star a possible planet candidate, with an orbital period of 7.026 days and a minimum mass of fifty times bigger than the one Earth has.

Likewise, CARMENES data have confirmed the existence of a planet around GJ 1148, with a minimum mass of about ninety times the terrestrial one, as well as of a companion whose orbital parameters were unknown. CARMENES has provided the orbital configuration of the system and has confirmed it as a multiple planetary system.

“CARMENES is the result of lot of people effort, both researchers and engineers, here and in Germany. In this work we compare the visible channel with the actual most precise instruments, and we demonstrate that our instrument is in the first division worldwide, and that it has the necessary precision for detecting warm rocky planets that orbit red dwarfs”, concludes Pedro J. Amado, astronomer of the Intituto de Astrofísica de Andalucía (IAA-CSIC) and co-PI of CARMENES instrument.

“It has been detected about fifty planets surrounding M stars, but its number has to be much bigger, as between 70 and 80% of the stars of our neighbor are red dwarfs little studied” – comments José A. Caballero (CAB, INTA-CSIC). “Besides, recent findings of rocky planets within habitability zone around Proxima Centaury, the Sun’s nearest start, or around TRAPPIST-1, a planetary system with seven planets within the habitability area, point to the huge amount of such object we can find”.

But red dwarfs present very intense activity cycles, and the phenomena associated to this activity, as spots or flares, can be confused with planets existence. “In fact, false positives are common when searching extrasolar planets, and here is one of the strength of CARMENES: observing with both the visible and the infrared channel we can confirm the findings without further verifications. No other instrument in the world can do this”, points Pedro J. Amado (IAA-CSIC).

CARMENES is a unique instrument in the world, both in precision and stability, required qualities for measuring the little speed variations that a planet produces on stars: CARMENES detects speed variations of stars located hundred of billion kilometers away with a precision of about one meter per second. To achieve this, it works in vacuum conditions and with controlled temperatures up to the thousandth of a degree. Thanks to these characteristics, researchers hope to discover potentially habitable planets in the coming years.