CARMENES, a spectrograph that operates at Calar Alto Observatory (MPG/CSIC), constitutes a unique instrument due its stability and its very high resolution, and also because it is capable for observing in both the visible and infrared channels simultaneously.

Today, the official delivery of this instrument to the observatory by the instrument's PIs from the Landessternwarte (Univ. Heidelberg) and Instituto de Astrofísica de Andalucía (IAA-CSIC) has taken place.

To date more than three thousand planets outside our Solar System has been detected, most of them hostile for life due to their size or their extreme proximity to the star. CARMENES project, developed by a consortium of eleven Spanish and German institutions, and co-lead by the Instituto de Astrofísica de Andalucía (IAA-CSIC), was designed for searching earth like planets within the star habitable zone, the region around the star where the conditions allow the existence of liquid water. The instrument, which is already working looking for rocky and temperate planets from the Calar Alto Observatory (MPG/CSIC) 3.5m telescope, in Almería, has now become property of this observatory. 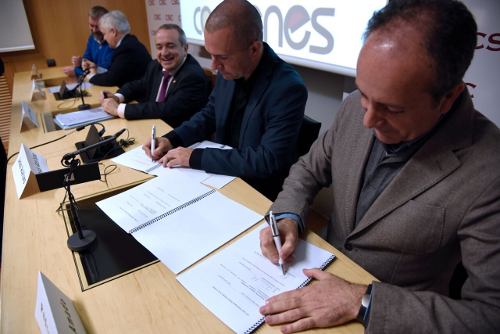 “This delivery is a relevant milestone in this kind of projects, since the consortium ceases to be the owner of the instrument although, of course, it continues exploiting it scientifically”, points out Pedro J. Amado, astronomer from IAA-CSIC and co-PI of CARMENES Project. Amado has signed, together with Andreas Quirrenbach, researcher from Landessternwarte (Univ. Heidelberg) who leads the project, and Jesús Aceituno, Calar Alto Observatory Director, the assignment document by the consortium.

This event took place at the CSIC headquarters within a scientific conference, opened by the CSIC’s President, where the latest discoveries of the instrument were analyzed.