The fingerprint of the stars: the new CAFÉ spectrograph for Calar Alto 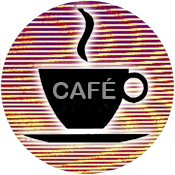 After passing the commissioning phase, the latest newcomer among the spread of instruments of Calar Alto Observatory is already at work: the high-resolution spectrograph known as CAFÉ. This device, designed and built at Calar Alto for its 2.2 m reflecting telescope, analyses in detail the light coming from celestial bodies in order to extract from it a rich wealth of astrophysical information of many kinds. CAFÉ will be one of the battle horses of the 2.2 m Calar Alto telescope from now on.

Almost all the information we have about the stars comes from the study of the light thy send towards us. The most powerful tools to analyse this light are called spectrographs. Spectrographs emulate in laboratory or at the telescope the process that nature performs when a rainbow is produced. In the rainbow, white light from the Sun goes through raindrops and, in the process, it gets dispersed into the different colours that build it up. Spectrographs take light from the sky, coming for instance from a star, and make it to pass through some device playing the role of raindrops. As a result, the light is decomposed into an infinity of colours: the stellar “rainbow”, what in physics is usually called spectrum.

The spectrum can be captured with some suited detector for further study. Spectral analysis yields an overwhelming amount of information about the celestial bodies: movements, temperatures, pressures, chemical composition, intensity of gravity… We may say that the spectrum of a star is equivalent to its fingerprint. But, apart from identifying the star in an univocal way, the spectrum includes much more specific data than any bar code that could be conceived.

Of course, the process that generates a spectrum, an artificial “rainbow”, is much more complex than that involved in sunlight falling over rain. Furthermore, the degree of detail reached when decomposing light into colours by means of a spectrograph is extremely larger than what raindrops can offer. The most powerful spectrographs belong to the échelle category, French word meaning “ladder” or “stairs” and that refers to the shape of one of its central pieces, that playing the role of water drops in the rainbow: the stepped diffraction grating.

Spectrographs of any kind are very usual among the display of instruments equipping all modern observatories. Of course, Calar Alto Observatory has had these devices from the very beginning of its operations in 1975. As any other instruments, spectrographs are updated and renewed every few years, to keep the Obsevatory always at the forefront of observational astronomy.

A new high-resolution échelle spectrograph has just been built for the 2.2 m Zeiss reflecting telescope at Calar Alto. This instrument has been named CAFÉ. The Spanish word café means “coffee”, but the name is really an acronym for Calar Alto Fibre-fed Échelle. This has nothing to do with really feeding the telescope with fibre-rich food (by the way, normal coffee is not particularly fibre-rich), but describes the procedure to guide stellar light coming from the telescope along a path that finally drives it into the spectrograph for analysis. Taking profit of the latest technological developments, telescope light is gathered into an optical fibre that runs along some 20 metres and carries it into the CAFÉ instrument itself, that in this case is not hanging from the telescope, but placed downstairs inside an isolated room, thermally and mechanically stabilised. This way, the precision of the instrument is dramatically enhanced.

CAFÉ spectrograph has been fully designed and built at Calar Alto Observatory, with Sebastián F. Sánchez as principal investigator and Jesús Aceituno as co-principal investigator. It is the first time an instrument devised for one of the large telescopes of the German-Spanish Astronomical Centre covers all its phases of development inside this institution. This way, Calar Alto stimulates technologically-based companies in its immediate surroundings. Collaboration has been given, too, by the University of Göttingen, Munich Observatory and Complutense University of Madrid. The company iTEC Astronómica has been the main contractor.

Until year 2010, the functions of CAFÉ were covered at Calar Alto by another échelle spectrograph called FOCES (Fibre Optics Cassegrain Échelle Spectrograph), an instrument belonging to Munich University, in loan at Calar Alto during many years, but retired by its owners in 2010. Some time in advance, the process to build its substitute had already been initiated. CAFÉ overruns the features of the former instrument thanks to a careful design, and to many improvements, both technological and conceptual, that have been implemented. Among these improvements outstands the especial attention given to the stability of the instrument. The device is equipped, too, with a specific data process software, the so-called “pipeline”, that will make easier its use and exploitation. Further updates and improvements are foreseen in the near future, both for the instrument hardware and for its control and data reduction software.

CAFÉ saw first light in May 2011 and, once fulfilled the commissioning phase, is already at work, available to the community of users of Calar Alto in Spain, Germany and the rest of the world. Among its many fields of application, we find the research on planets around other stars (exoplanets, or extrasolar planets), astero-seismology, or the study of brown dwarfs. CAFÉ will become one of the most demanded and scientifically productive instruments at the German-Spanish Astronomical Centre during the fore coming years.