A bubble in the interstellar medium

Observations with Calar Alto instruments are helping to unveil the content and history of W40, a ‘hidden’ region in our galactic neighbourhood where massive stars have been forming in the past few million years.

Only 1,600 light-years away, but hidden by dark patches of dust in the Milky Way in the constellation of Aquila (the Eagle), lies the W40 nebula. Although poorly known, W40 is a splendid example of a bipolar HII region, a type of nebula formed when newly born massive stars begin to heat up and ionize the clouds out of which they formed. The high pressures generated around those stars produce an expansion of the gas which eventually breaks out of the parental cloud, producing spectacular expanding bubbles, as shown by the picture of W40 obtained by the Spitzer Space Observatory at wavelengths between 3.6 and 24 microns. 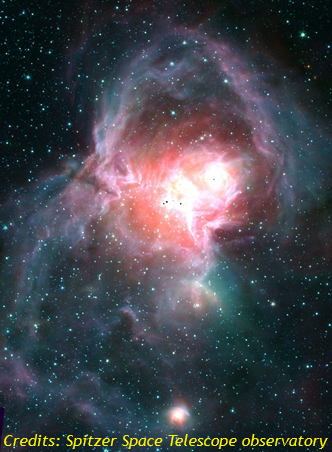 A close look at W40 suggests a somewhat complex scenario. To start with, W40 does not have a single star at its center, but a full-fledged cluster including a few massive stars and many more low-mass stars. And observations carried out from Calar Alto with the CAFOS spectrograph have shown that, somewhat surprisingly, massive stars were already present in the region before the cluster and the nebula existed.

Both the stellar content of the cluster and the extended population of massive stars outside its boundaries have remained largely unexplored thus far. This is partly due to the heavy obscuration that foreground interstellar dust causes on W40 and its surroundings, making most of its components accessible only through infrared observations.

The study reported here started with observations of W40 carried out with the Stratospheric Observatory for Infrared Astronomy (SOFIA), consisting of a 2.7 m diameter telescope with advanced infrared instrumentation flying onboard a modified Boeing 747 aircraft. The observations were obtained in the framework of the FEEDBACK legacy project exploring the interplay between massive stars and their surroundings.

SOFIA observations reveal the physical and dynamical conditions of the interstellar gas, while observations at visible and near-infrared wavelengths are needed to study the stars whose radiation and winds are responsible for those conditions. Furthermore, the astrometric observations obtained by the European Space Agency’s Gaia satellite are essential to tell the stars that belong to the region apart from the many unrelated foreground and background stars located along the line of sight.

A team formed by Fernando Comerón (European Southern Observatory, Germany), Anlaug Amanda Djupvik (Nordic Optical Telescope at La Palma, and University of Aarhus, Denmark), and Nicola Schneider (University of Cologne, Germany, and Principal Investigator of the FEEDBACK project) thus set out to put together the information from those various sources to obtain a comprehensive picture of W40. Observations obtained with Calar Alto telescopes play a central role in the project.

They used newly released Gaia data to select stars likely to belong to the region, but whose intrinsic characteristics such as temperature, luminosity or ages, were not yet known, and observed them with CAFOS. “We were surprised to find out that several previously unnoticed stars clearly belonging to the region had the spectra characteristic of hot stars, and probably contributed to set up the conditions that the bipolar nebula encountered once its central cluster was formed”, says Fernando Comerón. 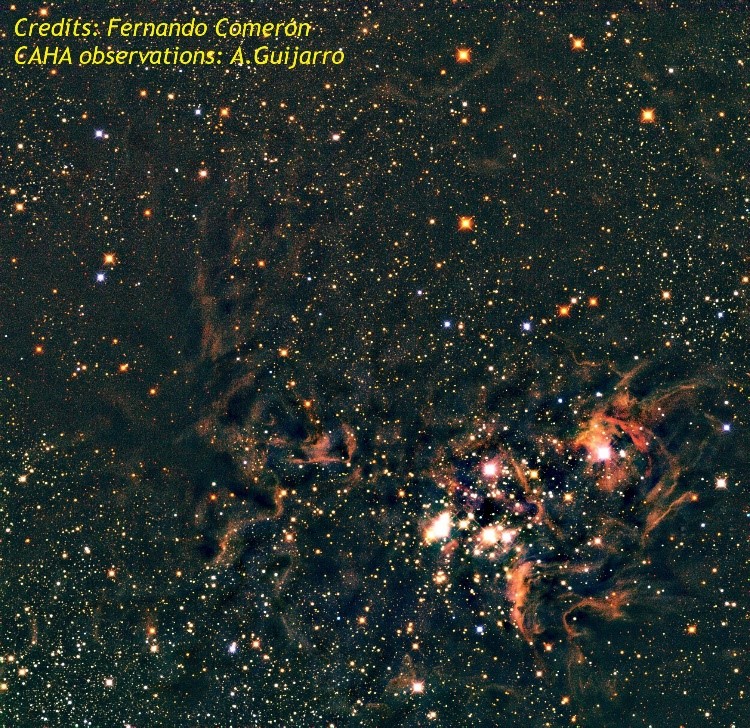 The content of the central cluster has been little known until very recently, when new observations with the European Southern Observatory’s Very Large Telescope (VLT) in Chile have obtained spectroscopy of virtually all its members. To determine the properties of those stars, the spectroscopy had to be complemented with new infrared images that were obtained recently with the Omega2000 near-infrared camera at Calar Alto’s 3.5 m telescope, which is shown here (the colour image is a combination of 4 filters with wavelengths ranging from 1.2 to 2.3 microns). “The Omega2000 images provide a deep and high-quality view of the cluster, but they also show the intricacy of the remnants of the cloud out of which its stars formed, being illuminated by the same stars that are evaporating it and producing a pattern of light and shadows that is not only beautiful, but also very informative”, according to Anlaug Amanda Djupvik.

“Understanding the physics and evolution of nebulae like W40 offers important clues about how stars form and interact with the interstellar medium”, notes Nicola Schneider. “This requires observations to be carried out in different parts of the electromagnetic spectrum and with a variety of observing techniques, highlighting the importance of each of the facilities that contribute to such studies”.

“It is remarkable how our study benefits from the synergies that can be obtained with observatories operating in very different environments: Spitzer is in orbit around the Sun, Gaia is located at a special position 1,5 million kilometres away from the Earth opposite from the Sun, SOFIA observes at high altitude from our planet’s stratosphere, and Calar Alto and the VLT are on privileged sites in two continents. A combination hard to surpass!”concludes Comerón.

I. Physikalische Institut (University of Cologne)