The CARMENES instrument at the Calar Alto observatory 3.5-meter telescope finds one exo-Earth and two super-Earths around two red dwarf stars, confirming the ubiquity of rocky planets around such tiny stars, whose violent flares may complicate and even prevent the detection of exoplanets.

Since 1995, over 4000 planets have been discovered out of our Solar System. The ample variety of these exoplanets has demonstrated that the structure of the Solar System, with rocky (or terrestrial) planets in the inner regions and gaseous and icy ones in the outer parts, is not so typical as believed. Other configurations, such as gas giant planets very close to their stars or systems with several super-Earths around dwarf stars, appear more common. In this context, a new detection of two planetary systems by the CARMENES instrument, operating at Spanish Calar Alto Observatory (CAHA, Almeria), reinforces the idea that dwarf stars tend to harbor rocky planets. 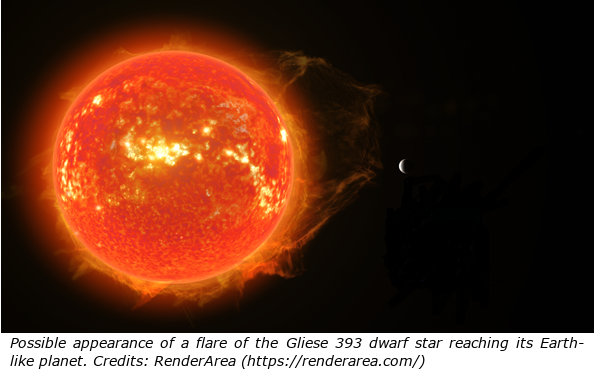 "Our current understanding of the formation of low-mass planets in orbits very close to small stars suggests that they are very abundant, with an average of at least one planet per star. Despite this abundance, we hardly have any data on the density of these planets that would allow us to deduce their composition", says Pedro J. Amado, a researcher at the Institute of Astrophysics of Andalusia (IAA-CSIC) who heads the study.

In our Solar System, Mercury, Venus, the Earth, and Mars are categorized as terrestrial or rocky planets. For extrasolar planets, those between half and twice the size of Earth are considered to be terrestrial, while those up to ten times the mass of Earth are classified as super-Earths, terms that have no implications for surface conditions or habitability. In fact, while the composition of Earth-like exoplanets may be similar to that of the rocky planets in the Solar System, the composition of super-Earths may also include other combinations of gas, rock, ice or water.

The systems newly detected by CARMENES are found around the red dwarf (or M-dwarf) stars G 264-12 and Gliese 393. Two planets with a minimum mass of 2.5 and 3.8 times that of the Earth have been found around the former, orbiting their star every 2.3 and 8.1 days, respectively. The planet of Gliese 393 has a minimum mass of 1.7 Earth masses and orbits its star every seven days. All three planets fall into the category of hot earths and super-Earths, and reach temperatures that preclude the presence of liquid water on the surface.

"To understand how the different planetary systems we are observing form and evolve, we need robust statistics on the number of planets that exist, as well as information on the architecture of the systems and the density of the planets. This will allow us to explain those that do not fit the known mechanisms, such as the GJ 3512 system that we also found with CARMENES, which includes a giant planet around a dwarf star, or to confirm the tendency of dwarf stars to host multiple systems," says Pedro J. Amado (IAA-CSIC).

In this sense, this work has also made it possible to detect a new factor that seems to influence the detections, since the planet around the star Gliese 393 had gone unnoticed in previous campaigns with other highly efficient planet-hunting instruments. Red dwarf stars show intense activity in the form of gigantic flares that can mask the signal from potential planets, and the research team have noted that the non-detection of Gliese 393's planet could be due to the fact that previous observations were carried out during a peak of stellar activity. They conclude that planets can most easily be detected in dwarf stars with moderate activity or outside the peaks of the star's activity cycle.

"The CARMENES work is focused on extending the available data to compose a global picture of the planetary systems. The three planets in these two systems are among the smallest in mass, and therefore in the amplitude of the radial velocity they instill in their stars, which accounts for the quality of the instrument," adds Pedro J. Amado (IAA-CSIC).

The sensitivity of CARMENES, mounted on the Calar Alto 3.5-meter telescope, is such that it is able detect the subtle wobble of a star, due to orbiting exoplanet(s), of only one meter per second: the speed of a walking person! An accuracy that will be further improved in the next version of the spectrograph, named CARMENES+. This instrumental update is being carried out by scientists and engineers from IAA-CSIC and from the observatory itself. “The permanent improvements of the instruments at Calar Alto allows the observatory to stay in the international elite and to imprint a technology brand ‘Made in Spain and Made in Andalusia’ in the astrophysics community.” asegura Jesús Aceituno, director de Calar Alto.