The Institute of Astrophysics in Andalusia (IAA-CSIC) co-leads the two designs pre-selected for the future instrument on the 3.5-m telescope.

CARMENES will be upgraded to extend its search for potentially habitable planets.

The Science Advisory Committee of the Calar Alto Observatory, composed of internationally recognized experts in various areas of astrophysics, has selected legacy projects and proposals for next generation instrumentation that define the scientific and technological lines of the observatory in the years to come.

This results from a call to the international astronomical community published on November 20th, 2019, to present scientific and technological projects which will contribute to maintain the level of excellence of the observatory.

After evaluating a dozen of proposals, presented by different international collaborations, the committee has recommended to start up three ambitious legacy observing programs  - CAVITY, KOBE and CARMENES+ - to be performed at the 3.5-m telescope of the observatory.

In addition, it has preselected the conceptual designs of TARSIS and GAMAICA, two new generation instruments, both co-led by researchers of the Institute of Astrophysics in Andalusia (IAA-CSIC). After the so-called feasibility study phase, the Executive Committee of the Calar Alto Observatory will select one of them for development and installation at the 3.5-m telescope

According to Jesús Aceituno, Calar Alto director, the committee was impressed by the quantity and quality of the proposals received, that “demonstrate that Calar Alto remains a key piece of astronomy worldwide and a motor of development for cutting-edge technology with a strong return in science, economy and industry”. 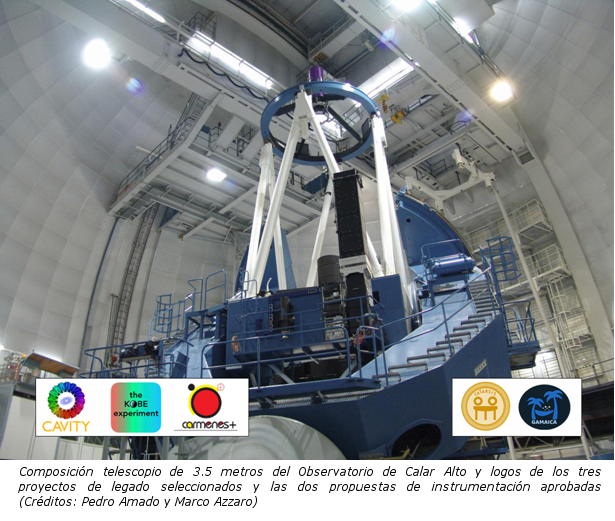 Following the committee’s recommendations, in the years to come, Calar Alto will dedicate more than a hundred nights per semester to three new and ambitious surveys, to be performed with the instrumentation currently available on the 3.5-m telescope.

One of these programs – led from the University of Granada - is CAVITY (Calar Alto Void Integral-field Treasury surveY), an exhaustive sampling of galaxies inhabiting the most empty areas in the local Universe – the so-called voids -, using the PMAS integral field unit spectrograph located at the 3.5-m telescope.

KOBE (K-dwarfs Orbited By habitable Exoplanets), led from the Astrobiology Centre (CSIC-INTA), will use CARMENES, a visible and infrared spectrograph co-developed by IAA-CSIC, to detect and characterize potentially habitable exoplanets around a large sample of K-type dwarf stars, which have masses between the Sun and cooler stars.

An upgrade of the CARMENES (Calar Alto high-Resolution search for M dwarfs with Exoearths with Near-infrared and optical Échelle Spectrographs) instrument will indeed be carried out to even improve the already remarkable stability of its infrared channel. This instrumental update, named CARMENES+, will allow to extend its successful search for rocky planets around a new and large sample of M-type red dwarf stars, in addition to fine tune its ability to detect and characterize atmospheres possibly similar to the one of the Earth.

As legacies, the results of these three surveys will be publicly available to the whole astronomical community. “These three legacy surveys are a continuation of the large experience gained by the observatory over a decade with this kind of large programs, since the pioneer ALHAMBRA until the successful CALIFA and CARMENES surveys, which have made Calar Alto and its sky quality a reference for the international astronomical community”, explains Dr. Jesús Aceituno.

A NEW INSTRUMENT FOR THE 3.5-M TELESCOPE

About the new instrumental projects, the committee has positively evaluated the conceptual design of TARSIS and GAMAICA, two integral field spectrographs of new generation, that will compete to be built and installed at the 3.5-m telescope at Calar Alto.

TARSIS (Tetra-ARm Super-Ifu Spectrograph), led from Complutense University of Madrid and IAA-CSIC, presents a design optimized for the UV range to study cosmological evolution through the observation of distant galaxies. GAMAICA (Galaxy Mapper Instrument at Calar Alto), led by the Astrophysics institutes in Postdam (AIP) and in Andalusia (IAA-CSIC), mainly targets the local Universe, namely the Andromeda galaxy (big sister of our Milky Way) and galaxies in Virgo, the closest cluster of galaxies.

In the coming months, both instruments will have to present a viability study and a technical review to the Observatory Executive Committee, in charge of the selection of the instrumental design to be finally built. The new instrument will see its first light at the 3.5-m telescope within a decade and, along with CARMENES+, it will be the flagship of the largest telescope in continental Europe.

”The selection of legacy programs and feasibility studies for the new generation of instruments for the 3.5-m telescope is a milestone in our history. Calar Alto will keep leading science niches at a worldwide level and developing pioneering new instrumentation” – states Dr. Jesús Aceituno - “There is no doubt it is a proof of good health for our center and it secures a viable and excellent future for this large Singular Scientific and Technical Infrastructure.”