CARMENES, the instrument that will search for Earth-like planets, starts its assembly at Calar Alto 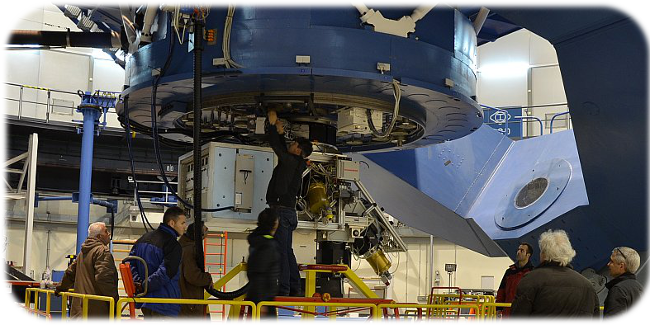 Before the end of this year, CARMENES instrument will open its eyes which to observe the sky in both the visible and the infrared, searching for Earth-like planets, one of the actual challenges of present astrophysics. During 2015 will happen a series of milestones starting this week with the integration of the instrument front-end, the part that connects the instrument with the telescope, collects the light and injects it into the fibers.

“We could say the front-end is as the eyepiece of CARMENES: it takes the fibers, the calibration lamps and the guiding system”, Jesús Aceituno, Deputy Director of Calar Alto (CAHA, MPG-CSIC), says. “It is a cornerstone, and during this week, we will make tests during day and night in order to check that this component is working perfectly”.

“This is the first step in the culmination of a project started in 2009. The next ones will be the arrival of the visible channel spectrograph and the infrared channel spectrograph, in July and September respectively. There is very little for the build consortium, in particular, and for the Spanish and German astronomers, in general, to start using this unique instrument in the world”, Pedro Amado, Spanish P.I. and scientific at Instituto de Astrofísica de Andalucía (IAA-CSIC) points..

The planets, while rotating around their stars, produce slight oscillatory movements on the stars that, if measured with the adequate accuracy, reveal the presence of those planets (although we cannot see them directly). That’s the way CARMENES will search for planets similar to Earth. 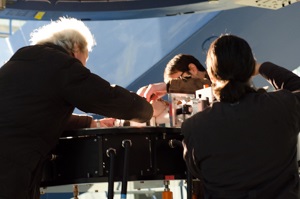 CARMENES is not only the first instrument that Spain proposes to be installed at Calar Alto Observatory, but further it is a unique instrument in the world, in both precision and stability –indispensable qualities for measuring the small speed variations a planet produces in the stars –. In fact, CARMENES represents an exciting technological challenge, as it will detect speed variations on stars which are hundred of billions kilometers away, with an accuracy of one meter per second.

To achieve such accuracy, not only a care optical design is needed, but also maintaining conditions of maximum stability in the operating environment of the instrument, which will work in high vacuum conditions and with electronically controlled temperatures up to hundredth of degree. So this instrument is a major challenge for the building consortium, where the Andalusia technology participation highlights.

CARMENES, which will work at Calar Alto Observatory (Almería) 3.5m telescope, is being developed by a cosortium of eleven Spanish and German institutions.

More about this project: http://carmenes.caha.es

This email address is being protected from spambots. You need JavaScript enabled to view it. 958230532