The best studied super-Earth to date

An international team of researchers with participation of the Institute of Astrophysics of Andalusia (IAA-CSIC) has measured with unprecedented accuracy the mass and the radius of Gliese 486 b, an exoplanet of the “super-Earth” category, discovered in 2021 by the CARMENES instrument at the Calar Alto Observatory. This study allows, for the first time, to make robust predictions on the internal structure and composition of a super-Earth.

An international team of astronomers led by José A. Caballero, from Centre of Astrobiology (CAB) CSIC-INTA in Madrid, with participation of the Institute of Astrophysics of Andalusia (IAA-CSIC) in Granada, has been able to model the interior of the exoplanet Gliese 486 b, and to estimate the relative sizes of the (metallic) core and (rocky) mantle.

“It is the first time that such a detailed study of the possible inner structure of an exoplanet is performed“ states Pedro Amado, an IAA-CSIC researcher and co-author of the study, to be published in the “Astronomy & Astrophysics” journal.

The analysis was made possible thanks to the data obtained with instruments such as CHARA, CHEOPS, Hubble Space Telescope, MAROON-X, TESS, and CARMENES. The team has also made predictions on the composition of the planet's atmosphere and its detectability with the James Webb Space Telescope, which will soon point its segmented mirror to the planetary system.

Precisely, the CARMENES spectrograph, located at the 3.5 m telescope of the Calar Alto Observatory (Almeria, Spain) was used by the Spanish-German consortium of the same name to discover this planet orbiting Gliese 486 (a red dwarf star located only 26 light-years away), and which may be considered as the best known rocky planet outside of our Solar System.

“This was made possible thanks to the exhaustive characterization of the planetary system using multiple instruments and telescopes located on the ground or in space, including the high-resolution spectroscopic data of the CARMENES instrument at Calar Alto Observatory, and photometric data obtained with the Sierra Nevada Observatory telescopes” emphasizes Eloy Rodríguez, another co-author of the work and a researcher at IAA-CSIC. 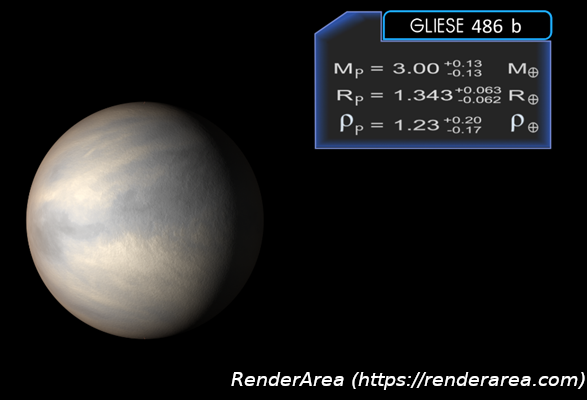 "Probably the most important results behind our work are not the values themselves, but the opportunities that they offer to future studies", says Esther González-Álvarez, another CAB astronomer that played a major role in the analysis.

González-Álvarez refers to future studies such as the formation of planetary magnetic fields in the liquid metallic outer core, because Gliese 486 b seems to have one as our Earth. These magnetic fields may act as a shield against the storms originated in the stellar host and prevent the erosion of the atmosphere.

The first exoplanet around a solar-like star, 51 Pegasi b, was discovered in 1995. Since then, every year, astronomers discover exoplanets that are less and less massive, closer and closer, and more and more similar to Earth. According to Pedro Amado, “the combination of data coming from space missions and ground-based instrumentation like CARMENES is the way to characterize more and better rocky exoplanets, and to be able to compare them with those planets in the Solar System.”