The Institute of Astrophysics of Andalusia (IAA-CSIC) leads a study based on data from Calar Alto Observatory (CAHA), showing the variability of the planetary nebula IC4997. The changes can be seen comparing observations taken nearly 30 years apart with the CAHA 2.2-meter telescope. This suggests that the central star of this planetary nebula probably hides a companion star.

Planetary nebulae represent one of the final stages in the life of low- and intermediate-mass stars, similar to the Sun. After exhausting their fuel, the outer layers of such stars are taken off, forming a fluorescent envelope around a white dwarf star (the "naked" core of the star after the expulsion of its outer layers).

In some tens of thousands of years, the nebula will disperse in the interstellar medium and the central star will become extinct, so that all planetary nebulae are expected to be (very slowly) variable. However, some of them present a variability unrelated to their natural evolution, which reveals processes that deviate from the norm. This is the case of IC4997, a nebula with which a Spanish team led by the Institute of Astrophysics of Andalusia (IAA-CSIC) has found itself again, thirty years later. 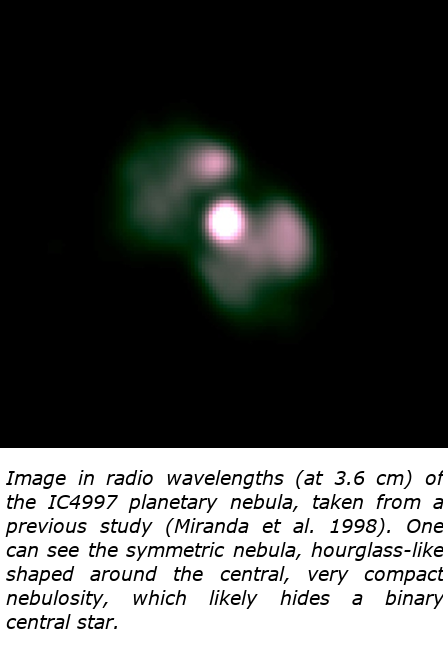 "For decades, the planetary nebula IC4997 has been known for its variability, which presents an episodic variation with a period of about fifty or sixty years," says Luis F. Miranda, a researcher at IAA-CSIC who leads the work. In 1993, we obtained high-resolution spectra of this object with the 2.2-meter telescope of the Calar Alto Observatory (CAHA). In 2019 and 2020 we obtained new high-resolution spectra, in this case with the CAFE spectrograph, also mounted at the Calar Alto 2.2-meter telescope, which showed changes that had never been detected in IC4997.”

The spectrum of a celestial object reveals its physical properties through the study of the absorption and/or emission lines of the elements that it is made of. In this case, the crucial line has been the one of hydrogen alpha (H alpha), which shows changes in its profile indicating that the stellar wind has weakened considerably in these last twenty-seven years.

"The variability of IC4997 has been attributed to numerous causes. Our work suggests that the main reason for the IC4997 variability is a mild, perhaps periodic, episodic variation of the stellar wind. The origin of this variation of the stellar wind is still unknown, but it could be related to a star that orbits around the central star of IC4997 with a period of about 50 or 60 years" says Luis F. Miranda (IAA-CSIC).

The scientific team concludes that, in order to study the evolution of IC4997 and confirm whether the scenario of a binary star is correct, it is essential to continue with observations for the next few years. In this regard, the CAFE spectrograph of the Calar Alto Observatory is crucial, since it provides the adequate spectral resolution for the study of emission line profiles that can trace changes due to an increase in the wind intensity over a few years, as it can be predicted from other data.