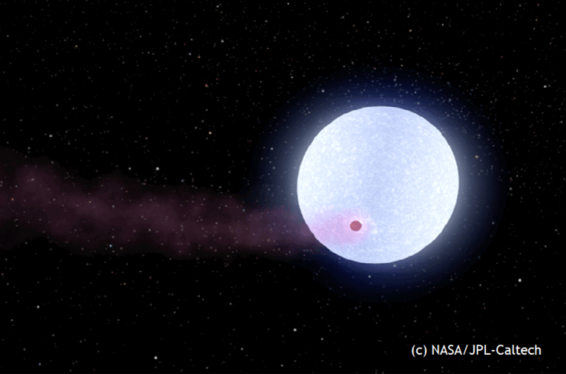 Reanalyzing CARMENES observations of the Kelt-9b exoplanet, taken at Calar Alto, an international team with participation of the Institute of Astrophysics of Andalusia (IAA-CSIC) has revealed the presence of oxygen in this exoplanet atmosphere, the hottest known to date. It is the very first time that atoms of oxygen are detected in a planet outside the Solar System.

Since the discovery, in 1995, of the first planet outside of our Solar System, more than four thousand exoplanets have been detected. During these decades, science teams from all over the world have tried to characterize their atmospheres and to explain why these new worlds are so different from the planets of the Solar System. Now, an international team, with participation of the Institute of Astrophysics of Andalusia, publishes in the Nature Astronomy journal the finding of atoms of oxygen in the exoplanet named Kelt-9b. It is the very first detection of the compound, that human beings commonly associate to life, in the atmosphere of an exoplanet.

Still, with a temperature of about 4300 degrees, the Kelt-9b exoplanet cannot host life. This is the hottest exoplanet known to date, even hotter than some stars. It is a giant gaseous planet, similar to Jupiter, except that the temperature of its atmosphere is so hot that iron could melt.

These extreme temperatures are due to the fact that Kelt-9b orbits very close to its host star – itself twice as hot as our Sun, with a temperature of 10,000 degrees. So that it completes one orbit in only ca. 36 hours. Since its discovery in 2017, scientists try to understand the nature of this so hot and so peculiar object, as well as the reason why it does not disintegrate despite being so close to its star.

To study the atmospheres of those planets, the transit method is used, that is, small eclipses produced when the planet passes in front of its star. During a transit, the light from the host star will cross through the atmosphere of the planet, which allows us to study, using high-accuracy instruments like the CARMENES spectrograph mounted on the Calar Alto 3.5-meter telescope, the physical characteristics and composition of the atmosphere.

"Our team has detected footprints of atomic oxygen in the planet spectrum. Since Kelt-9b is a very hot, gaseous giant planet, this detection is not a proof of life, but it is the first firm detection of atoms of oxygen in the atmosphere of an exoplanet”, emphasizes Francesco Borsa, a researcher at Osservatorio Astronomico di Brera, Italy (INAF), who leads the study.

The detection was made possible thanks to a new computer model developed by the science team, the most advanced designed to date to study hot exoplanet atmospheres. The model did not only coincide with previous observations of other species in the Kelt-9b atmosphere, but it also predicted that data should show the presence of atoms of oxygen.

This way, the team analyzed again previous observations of the planet, obtained in 2017 with CARMENES, that had already revealed an extended atmosphere of hydrogen, evaporating at a rate of 100,000 tons per second while Kelt-9b orbits so close to its star. The results from Borsa et al. confirm the prediction of their model: signs of oxygen were always there, but they had not been detected by former studies.

"The agreement between the model and the observations is a milestone in our exploration of planets outside the Solar System. It demonstrates that we can now create realistic models of exoplanets, improving significantly our capacity to understand the hottest atmospheres. Although it is not yet possible to perform similar observations for atmospheres of smaller and colder planets, it shall be the case in the future. We may consider this work as a dry run for future studies of search for oxygen in the atmospheres of exoplanets in the Galaxy, including smaller, possibly habitable worlds”, adds Denis Shulyak, a researcher at Institute of Astrophysics of Andalusia (IAA-CSIC) who participates in the finding.

“This discovery shows one more time the unique capabilities of the CARMENES spectrograph on the 3.5-meter telescope, not only to detect Earth-like planets, but also to study the atmospheres of other exoplanets, including the finding of possible biosignatures like oxygen” concludes Jesús Aceituno, Calar Alto observatory director.