The planet Venus is permanently covered by high clouds that extend over a thick atmosphere that hide from direct view the hottest planetary surface (about 460°C) in the Solar System. Three Calar Alto telescopes participate in an ambitious campaign of Venus observations combining data from different space missions and ground-based telescopes to understand Venus’ cloud layers and possible changes in the planet’s brightness. The first results of this campaign are presented these days at the Europlanet Science Congress.

Venus is the planet that has the closest approach to Earth, but its surface remains invisible, fully hidden by thick layers of clouds that reflect most of the sunlight making Venus the brightest planet as observed from Earth. Despite being so close and bright, Venus holds several mysteries in its atmosphere and its surface. One of the most recently discovered is the changes in the global brightness of the upper clouds detected when comparing images of Venus obtained on different years. What causes those changes, and what is their impact in the atmosphere and surface are still largely unknown.

Last summer, an international team coordinated by Yeon Joo Lee, an investigator from the German Aerospace Center (DLR Berlin), successfully carried out an ambitious observation campaign of Venus dayside (the hemisphere of the planet illuminated by the Sun). This campaign used a unique opportunity for coordinating observations from 2 spacecraft (the BepiColombo and Akatsuki missions), the Hisaki space telescope, and 6 observational ground-based astronomical facilities, including the 1.23, 2.2, and 3.5 telescopes at Calar Alto observatory. The former two telescopes provided high-quality images with the PlanetCam instrument, while the latter, which is the largest optical telescope on the European ground, was used with the PMAS integral field spectrograph to offer a unique 3D view of the planet. 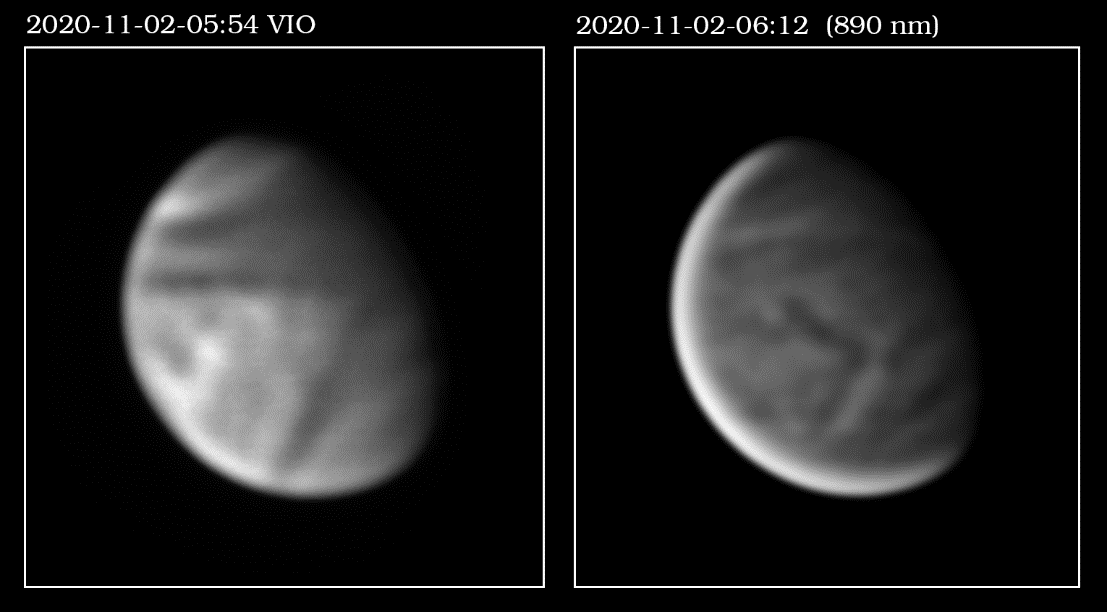 The team measured the Venus brightness over a broad range of “colors”, or wavelengths, from the short ultraviolet to the near-infrared. Such a wide spectral coverage cannot be acquired from a single facility and the combination of spacecraft and ground-based data was highly complementary.

Most of the observations covered at least 4 consecutive days, thus sampling one rotation period of the atmosphere, which is dominated by hurricane-like winds of nearly 400 km/h, at the cloud tops. The contemporaneous observations taken in late summer 2020 allow to compare three different viewing geometries of Venus as seen from BepiColombo, Akatsuki, and the Earth. 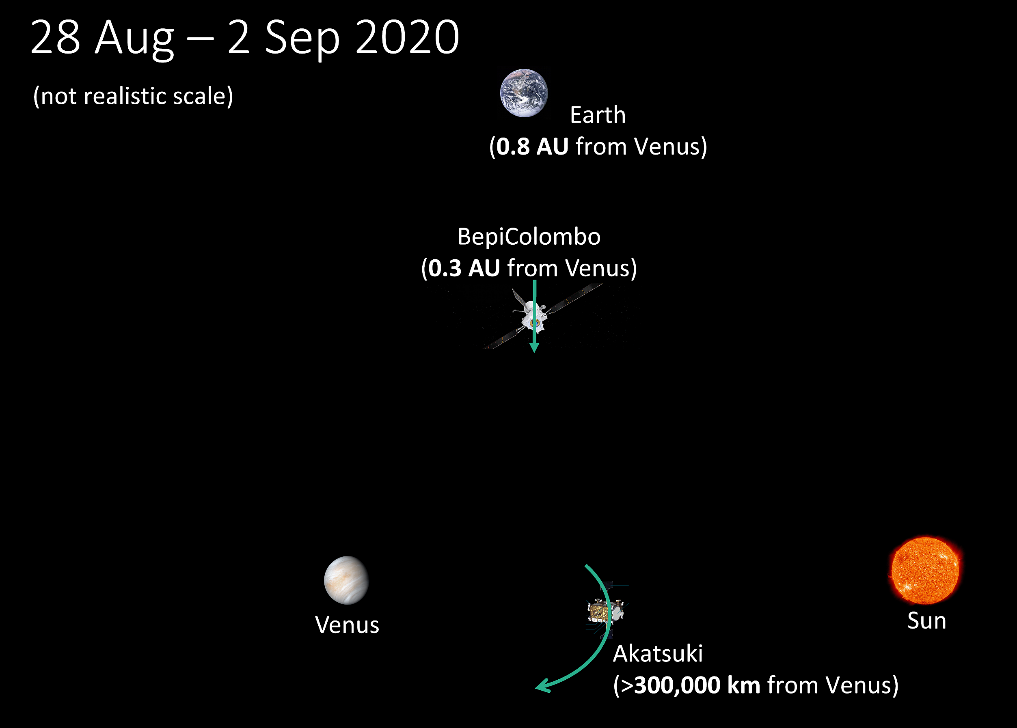 Relative locations (not to scale) of Akatsuki, BepiColombo, Earth and the illumination from the Sun during the campaign period. Green arrows indicate movements of spacecraft.

What we can “see” in these observations is solar light reflected by the upper clouds at an altitude of 70 km above the surface. But these clouds hold a long-lasting mystery, which is the quick reduction of their brightness that has been observed from the blue color towards the ultraviolet. This reduced brightness is caused by changes in an unknown absorber in the clouds that taints the clouds dark in blue to ultraviolet light. The identity of the absorber remains unclear but it is suspected to play a significant role in the solar energy absorbed by the planet.

The complete dataset from the international campaign are being presented these days at the Europlanet Science Congress (EPSC2021), the largest meeting dedicated to planetary sciences in Europe, commonly gathering 1000+ researchers. These data will help to better understand the spectral and temporal variations of the unknown absorber, thanks to its broad spectral coverage over the one rotation period of the atmosphere of Venus.

Despite the COVID-19 outbreak challenged the summer 2020 campaign, Y.J. Lee’s team eventually succeeded to gain valuable experience for follow-up observations of Venus. Using this experience, a new Venus dayside campaign will take place for June-July 20222 (Fig. 5). Calar Alto telescopes and their instruments will very likely contribute again significantly to the effort. That may allow us to understand in the end how the neighbor planet of our Earth ended up with such a dense, turbulent atmosphere, creating a hell-like greenhouse effect on its ground that our own planet shall hopefully never reach anytime soon.

Calar Alto Observatory is one of the infrastructures that belongs to the national map of Unique Scientific and Technical Infrastructures (Spanish acronym: ICTS), approved on November 6th, 2018, by the Science, Technology and Innovation Policy Council.