This Friday, July 8th, a delegation from the University of Almería (UAL) has visited Calar Alto Observatory installations. Among the collaboration projects that will be launched, stand out the creation of an astronomical lecture room at the UAL, the incorporation of trainees at the Observatory and the creation of a summer course that approach its work to the whole society.

The University of Almería (UAL), Calar Alto Observatory (CAHA) and Instituto de Astrofísica de Andalucía (IAA-CSIC) have ratify a compromise in order to continue with the UAL-CSIC collaboration agreement signed in 1996, progressing in some of its contents. This Friday July 8th, a delegation from UAL, headed by the rector Carmelo Rodriguez, has visited Calar Alto Observatory installations, the biggest observatory in Europe mainland. 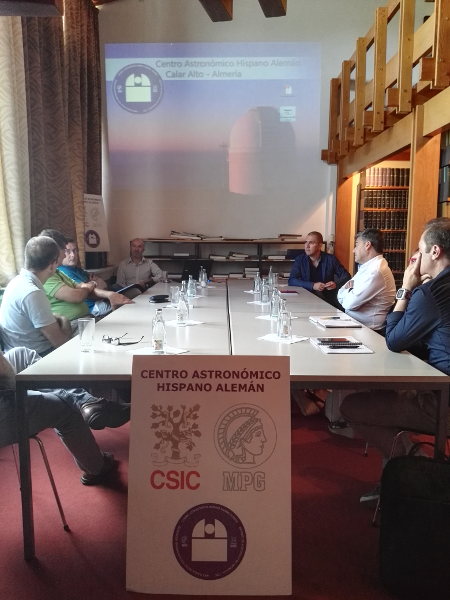 The collaboration between the three institutions will allow, among other activities, the creation of an astronomical lecture room, led by Jorge Iglesias, an IAA-CSIC astronomer. This lecture hall will have as its main task spreading astronomy related aspects to the UAL community through courses, expositions, lectures and social gatherings. In order to let the university community have a firsthand knowing of the Calar Alto role in the international astronomical scene, among the offered activities a guided visits program to the Observatory will be included.

The UAL delegation visit has served to bring to the table some of the measures that are intended to be enhanced between the institutions, directed to the employability of UAL students: the opportunity for students to join the engineering area in order to develop different astronomical instrumentation projects within Observatory installations, and also other related space technology projects led by IAA-CSIC members.

Another line that the three institutions aims to promote is the inclusion of a dedicated curse oriented to familiarize the university community and Almería society with the Astronomy in general, and with Calar Alto Observatory in particular, in the next UAL's Summer Courses program.

During the visit, besides participating in the work groups, the rector Carmelo Rodriguez, together with Antonio Posadas Chinchilla, vice rector of Research; María del Mar Ruiz Domínguez, vice rector of University Extension and Sports; Antonio Fernández Martínez, Govern coordinator and rector delegate for interactions with enterprises; and José Antonio Martínez, coordinator for Communications and IT, had the opportunity to go through the Observatory installations, stopping at the Observatory biggest telescope where CARMENES project is located and focused to find potentially habitable planets.

Calar Alto Observatory (CAHA) is one of the big national Singular Scientific and Technological Infraestructures (ICTS), and it is jointly operated by CSIC through the Instituto de Astrofísica de Andalucía (IAA-CSIC), and the Max Planck Society through the Max Planck Insitut für Astronomie. Presently there are six telescopes working at CAHA. Three of them have been put into operation during last year thanks to the effort and dedication of the Observatory staff, together with the achievement of different national and international agreements.

The Instituto de Astrofísica de Andalucía (IAA-CSIC) is a research center devoted to the Universe exploration, and his work include practically all astrophysics areas, from close objects as the Sun or the Solar System planets, to stellar physics, our galaxy study or even the up to now most distant ones.

IAA-CSIC manages both the Sierra Nevada Observatory (Granada) and the Calar Alto Observatory (Almería), and it is developing technology for ground-based observatories, with instruments like CARMENES which is searching for planets similar to ours but surrounding other stars, and other assigned to big international telescopes. Besides, this research center has participated in many spatial missions that has carried technology developed at Andalucía to Mars, Venus, Saturn or a comet, and it is also actively working in some of the most exciting missions that are currently been carried out for projects in Mercury, Jupiter or the Sun.