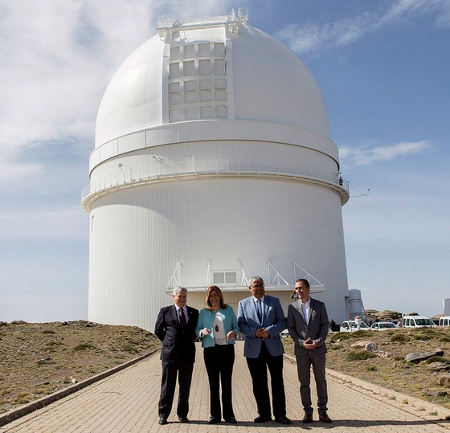 The president of Junta de Andalucía has visited the observatory because of the presentation of CARMENES project, which will search for exoplanets where the conditions could allow liquid water.

The president of Junta de Andalucía, Susana Díaz, has committed the support from her govern, within the scope of its competences, for the observatory continuity, as its German partner will leave at the end of 2018.

The president of Junta de Andalucía, Susana Díaz, carried out today a visit to the Calar Alto Observatory, a scientific installation located at Sierra de los Filabres, Gérgal (Almería), which is jointly operated with an international agreement between Spain and Germany through the ‘Consejo Superior de Investigaciones Científicas’ (CSIC) and the ‘Max Planck’ (MPG).

Susana Díaz has reiterated her desire of “to avoid more researchers leaving, giving them stability, and letting them know the Junta’s commitment with those elements which make possible Andalucía to be power, placing it at the forefront, and earning international recognition”.

Calar Alto Observatory is one of the big national Singular Scientific and Technological Infraestructures (ICTS) and is jointly operated by CSIC through the ‘Instituto de Astrofísica de Andalucía’ (IAA-CSIC) and the ‘Max Planck Society’ (MPG) through the ‘Max Planck Institut’. 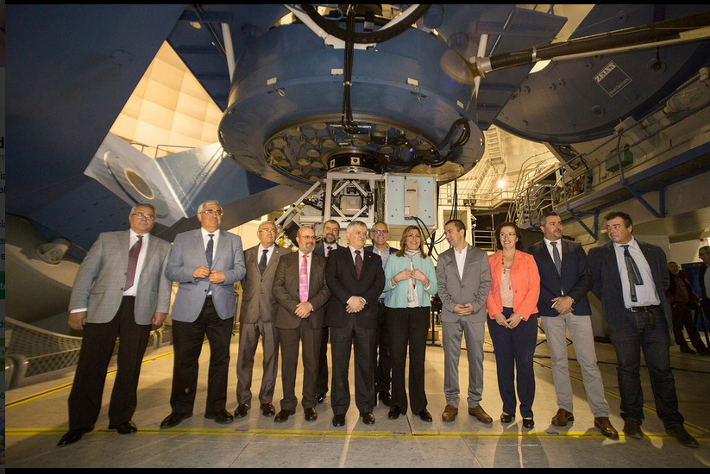 CARMENES: Searching for a second earth from Calar Alto

Today, more than two thousand planets beyond our Solar Sistem has been detected, most of them hostile for life due to its size or a great proximity to its star.

CARMENES project, developed by a eleven Spanish and German institution consortium, and co-led by the ‘Instituto de Astrofísica de Andalucía’ (IAA), was designed for search earth like planets within habitability area of a star, where the condition could allow liquid water. After five years of development, the instrument is already operative and it is looking for a second earth from the Calar Alto Observatory (CSIC-MPG) 3.5m telescope, in Almería.

The project, with a strong international character and a very relevant Spanish participation, within highlights Andalucía contribution (the infrared arm was developed at the ‘Instituto de Astrofísica de Andalucía’), is integrated into the Calar Alto Observatory contribution to the international community. CARMENES is, today, a unique instrument in the world.