A comet under crystal-clear skies 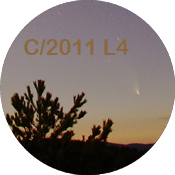 The experienced Calar Alto astronomer Gilles Bergond took this photograph of comet C/2011 L4 (PanSTARRS) the 18th of March 2013. The comet is clearly seen close to the western horizon, right from the upper part of the tree. However, the most striking feature of this casual shot is the clearness and outstanding transparency of the sky at Calar Alto. The zodiacal light, touchstone of the quality of any astronomical-quality sky, extends from the horizon crossing the image towards the upper left corner, occupied by the Moon. The zodiacal light is a lenticular cloud of interplanetary dust, faintly glowing lighted by sunlight. This diffuse band, much fainter than the Milky Way, can be seen only under the clearest skies and its presence in this photograph, even under moderate moonlight, documents the quality of the sky at Calar Alto Observatory, placed at 2168 m over sea level at Filabres mountain range in Andalusia, Spain.

The image was taken in a casual manner and using a quite simple equipment: an Olympus mirrorless DSLR camera with a wide-angle lens (12 mm focal length, f/3.5) and 50 seconds exposure time on a static tripod (star trails caused by Earth rotation can be seen enlarging the photo). Other celestial objects appear in the frame, apart from the comet and the Moon: planet Jupiter, several star clusters and two neighbour galaxies (M33 and M31).