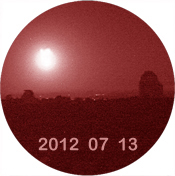 The Solar System contains tiny solid fragments, called meteoroids, whose dimensions range from fractions of a millimetre to several metres. Over that size one begins to speak about asteroids or cometary nuclei.

When a meteoroid kicks the Earth, it falls on the atmosphere with a very high speed, tens of kilometres per second. The friction with the air is strong enough to turn incandescent the object, and to make it to shine: this is the process behind the popular shooting stars.

Smaller meteoroids are much more abundant than the larger ones. For this reason most shooting stars are relatively faint, due to solid cosmic fragments with sizes similar to those of sand grains, or even less. But from time to time a meteoroid has a larger size and it offers a luminous display so bright that it deserves a special name, fireball, and may be accompanied by sounds and explosions.

In the early morning of July the 13th 2012 a very bright fireball, with sound effects, was seen over the centre of Castile. The display was well seen from the large city of Madrid and its surroundings, but it was very appealing, too, from almost all the Iberian Peninsula. Around 2:04 (official peninsular Spanish time), a meteor crossed the sky and, for only a few seconds, it was so strong that the midnight sky got the brightness of midday.

The phenomenon was registered at different places of the Iberian geography, including the stations of the Spanish Network of Research on Fireballs and Meteorites in the provinces of Huelva, Sevile, Madrid, Toledo, Guadalajara, Granada and Malaga. The event was caught, too, by the cameras at Calar Alto Observatory.

Thanks to these data, and to others, it has been possible to deduce the trajectory of the meteoroid through the atmosphere, its parent orbit across the Solar System and some information on its chemical composition. The preliminary analysis of the orbit made by José María Madiedo shows that this firewall has cometary origin: its parent meteoroid was a cometary ice fragment placed in an orbit very typical for this kind of objects. The physical nature of these meteoroids, linked to the conditions of the entry into the atmosphere, fully discard the possibility that some fragments may have reached the ground: without any doubt, the parent object (about one meter in size) got completely disintegrated along its path through the atmosphere, that began to be visible at an altitude of 110 km and ended in an explosion at more than 30 km over ground level.

The data obtained at Calar Alto show the event in three frames registered with the cameras of the Observatory, that take images every second. These are the data taken most South-East, and their analysis has contributed to study the trajectory of the fireball.

The three frames showing the event.