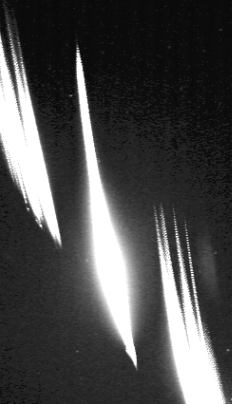 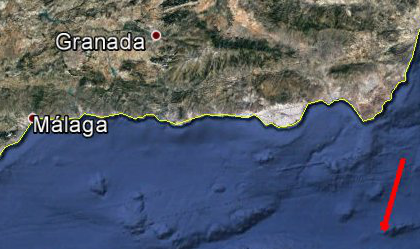 This year has started with lots of fireballs surrounding the Spanish’ south skies.

During the two past night, two more bright fireballs could be registered. The one at 04:09 UT of February 18th could only be registered with one of the surveillance webcams operated at Calar Alto Observatory in Almería. Rest of observatories having SMART Project detectors had clouds, so this fireball couldn’t be triangulated and no information could be gathered from this object.

However, the second one at 03:31 UT of February 19th was much more impressive and was registered with the SMART Project’s detectors operated at Calar Alto (Almería), Sierra Nevada (Granada) and Sevilla observatories. And again, with the Calar Alto Observatory (Almería) south surveillance webcam.

As said above, no information could be determined from the first fireball, the one at February 18th, as only the southeast Calar Alto Observatory (Almería) surveillance webcam could register it.

But following the preliminary analysis carried out by Professor José María Madiedo (Instituto de Astrofísica de Andalucía IAA-CSIC) of the second fireball, on February 19th, this object had an asteroidal origin. The rock detached from an asteroid impacts against our atmosphere at a speed of about 126.000 km/h. The luminous part of this object started at an altitude of about 99 km above Mediterranean Sea, just in front of Almería’s coasts, moved then southwestward and finished at an altitude of 31 km above the sea.

Below are the videos that could be registered of both fireballs. The first two videos are the ones of the second fireball, on February 19, obtained with both the SMART detector and the surveillance southeast webcam operated at Calar Alto Observatory (Almería).