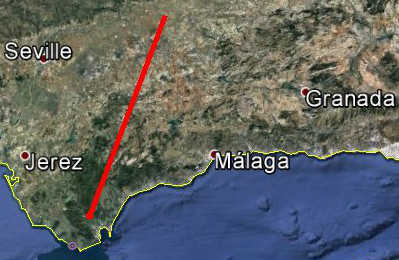 Just a few nights after the first big fireball of 2020, last January 28th, a new meteor flew above Southwest Spain skies, and again crossing Seville and Cádiz provinces. This time its direction was southwestward and it lasts more time than the January 28th one.

This second fireball of the year happened at 22:43 UT (23:43 local time) of January 31st, and can be registered with SMART Project’s detectors operated at Seville and La Sagra (Granada) observatories.

In this occasion, the west SMART's detector at Calar Alto Observatory (Almería) couldn’t register it, but the west surveillance camera located at this observatory was able to record this object that could be seeing even with the bright light of the moon.

Following the preliminary analysis carried out by José María Madiedo (Instituto de Astrofísica de Andalucía IAA-CSIC), PI of the SMART Project, this fireball had a cometary origin. Its initial speed was of about 133.000 km/h, starting its luminous part at an altitude of 102 km, moving then southwestward and finishing at an altitude of 87 km above the ground.

The above left image shows the path this fireball followed above Southwest Spain.

Below is the video that was registered with the Calar Alto Observatory (Almería) west surveillance webcam. As the video shows this fireball was bright (perfectly distinguished although the moon is in front of the camera objective and also having in mind that it happened nearly 300 km away from Calar Alto) and had a very long duration.