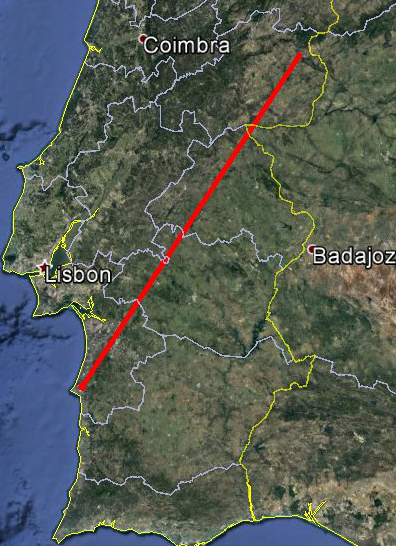 A bright fireball crosses the Portugal’s skies from northeast to southeast on the night of October 2nd at 22:38 UT (00:38 Spanish local time, already on the 3rd of October).

This event could be followed with the SMART Project’s detectors operated at the observatories of Calar Alto (Almería), OSN and La Sagra (Granada), La Hita (Toledo) and Seville.

Together with the SMART detector at Calar Alto Observatory (Almería), the west surveillance webcam of this center could also register this fireball.

As the preliminary analysis carried out by Professor José María Madiedo (University of Huelva), PI of the SMART Project, states, this object has a cometary origin.

The initial height of the luminous part of the event took place at about 153 km above the ground and it finished at an altitude of about 96 km. The path this object followed above the ground happened above Portugal, starting at the north-center east, and finishing above the southwest of the country, as the figure on the left shows.

Even with the great distance from where the event occurred to Calar Alto Observatory in Almería (south-east Spain), this object colud be registered with two detectors at the Observatory.

Below are the videos registered at Calar Alto Observatory (Almería) with both the SMART detector and the surveillance webcam.