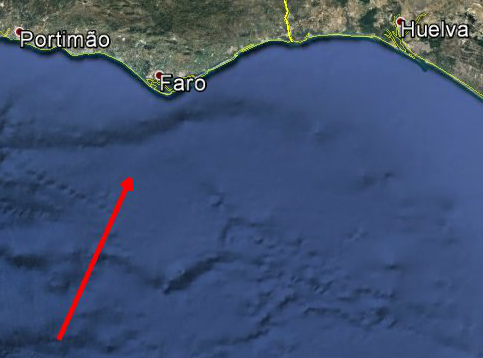 Last September 29th at 22:30 UT (00:30 local time already on September 30th), a rock from an asteroid impacts against our atmosphere above Gulf of Cádiz (southwest Iberian Peninsula) in front of Portugal south coasts.

This event could be registered with the SMART Project’s detectors operated at Seville, La Sagra (Granada) and Huelva observatories.

The analysis of this phenomenon was carried out by Professor José María Madiedo (University of Huelva), PI of the SMART Project.

His research reveals that the fireball was produced as consequence of a rock detached from an asteroid which impacts against our atmosphere at an estimated speed of 72.000 km/h and starting at an altitude of about 93 km. The object then moved northeastward towards Portugal coasts and finished at an altitude of 28 km above Atlantic Ocean, in front of Faro city, as it is shown on the left image.

Below is the video that could be registered about 400 km away to the east from the event location, registered with external surveillance camera operated at Calar Alto Observatory (Almería).