Another fireball on January 07th in this active start of 2019 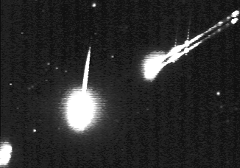 The start of this new year is being very active, concerning fireballs observations. This occasion, a short but bright fireball flew just in front of Málaga (South Spain) east coasts, close to the border of Granada province. The object could be registered with the SMART Project's detectors operated at Calar Alto (Almería), La Hita (Toledo), La Sagra (Granada) and Sevilla Observatories.

As usual, this event could be also followed by the Calar Alto Observatory (Almería) South surveillance webcam.

To the left of this text is a detail of the slow-motion video of the event, since it took place very quickly, while below are shown the videos from the SMART's detector and the South surveillance webcam operated both at the Calar Alto Observatory (Almería).

The analysis of this event has been carried out by Professor José María Madiedo (University of Huelva), the PI of the SMART Project. As previous objects analyzed, the present one had an asteroidal origin. The calculated speed was of about 80.000 km/h. The luminous part of the event start at an altitude of 103 km above the Mediterranean Sea, just in front of the east part of Málaga (South Spain) coast. The object then moved northeastward and finished at an altitude of 59 km above the limit of Málaga and Granada provinces (South Spain).

The path this fireball followed between the Mediterranean Sea and the limit of above mentioned provinces, can be seen in the top left image. The top right image shows the fireball with the emission spectrum lines.

The videos at real speed are below.