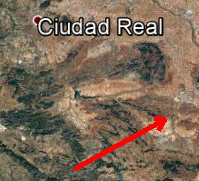 Again the skies of Castilla La Mancha (mid-south Spain), specifically the south of Ciudad Real province, have witnessed a new fireball. This time, the event happened at 2:35 UT during the Magi Night, and could be registered with the SMART Project's detectors operated at Calar Alto (Almería), La Hita (Toledo), La Sagra (Granada) and Sevilla Observatories.

This fireball could also be registered with two of the Calar Alto Observatory surveillance webcams, although the object passed just on the border of both cameras.

As the preliminary analysis carried out by the SMART Project's PI, Professor José María Madiedo (University of Huelva) states, again this event had an asteroidal origin. The speed was of about 83.000 km/h, with an initial altitude of 95 km and a final altitude of 39 km above the ground.

As it is shown on the left image, the whole path happened above the south of Ciudad Real province, moving from southwest to northeast.

Below are the videos that could be registered at Calar Alto Observatory (South Spain) with both the SMART's detectors and with the two surveillance webcams.